Bermuda Triangle. I’m sure you are somewhat intrigued already. So why does the mere mention of the Bermuda Triangle catch anyone’s attention? And why does it mostly bring extreme fear?

The Devil’s Triangle, as it is popularly called, has been the subject of many arguments as to the veracity of its alleged mystery. There are people who have conceptualized some funny Bermuda Triangle theory. Although some others have turned to science for a more believable explanation, others stick to legends and stories of “the other kind”.

The longest-running Bermuda Triangle theory is the so-called paranormal existence. The increasing number of ship and aircraft disappearances has led some people to put the blame on the presence of “something out of the ordinary”, probably as an excuse of not being able to provide a more logical sense of the circumstances.

One famous Bermuda Triangle theory is that it is supposedly the lost city of Atlantis. While no proof has been presented to support this theory, some people insist that they have seen and felt the powers of the lost city.

Others, due to a lack of realistic explanation have begun pointing fingers at Aliens as the one responsible for the tragedies. As it is, the claim has been considered unfounded to date. 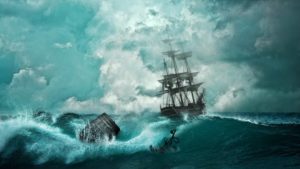 People who have raised eyebrows at these supernatural theories have thought of sensible theories that could unravel the Bermuda Triangle mystery. The possible truths are: that the tropical weather may have been unpredictable during those instances, thus creating waterspouts that are in reality, able to destroy any passing ship or plane. There’s also the Bermuda Triangle theory about the gas bubble. This means that the presence of high concentration of methane gas, which causes a depression in the water as the gas comes up from the sea, can make any passing ship or plane disappear without trace. Another less hypothetical Bermuda Triangle theory is the effect of the Gulf Stream. The sea current is extremely strong, which may be a bit too hard to handle for some crew, thus throwing them off course. This is also coupled with the theory that there is an unusual magnetism on the area like the “Devil’s Sea” in Japan. And although there hasn’t really been any recorded underwater earthquake activity, scientists have observed several seismic activities in the area which are more than capable to bring about those accidents.

READ ALSO:  What Is an ICO and How Does It Work?

So many have attempted to formulate the best Bermuda Triangle theory, but no one has really come any closer to spelling out the truth. Like the argument if there is indeed Heaven and Hell, the mystery surrounding the Bermuda Triangle may be best left as it is. Supernatural, paranormal, aliens and giant sea creatures? Who knows? We can only speculate.

“No man is a prophet in his own country.” That line keeps running through my mind as I sit over lunch with my sister who I haven’t seen in several years. These days I’m the […]

The Definition of a Spiritual Catalyst

April 9, 2020 Edgar Reiss World Comments Off on The Definition of a Spiritual Catalyst

The Modern Significance of Hawthorne’s Suspicion of Science

April 20, 2020 Edgar Reiss Science Comments Off on The Modern Significance of Hawthorne’s Suspicion of Science

Many of Hawthorne’s characters are burdened by inner conflicts which are never resolved into a tidy resolution. “The Birthmark”, however, has a more clearly defined moral than some of Hawthorne’s other work. The social significance […]

Hip hop rapper Sarkodie after the earth tremor yesterday in Accra has showed some parts of his room which got cracked after the incident. Yesterday around 10:50 pm, the southern [...]