Donald Trump is the 45th president of the United States. While everyone seems to think that they know him, there are likely many things that you do not actually know about him. Here we are going to send you some of these facts about Donald Trump that we hope you did not previously know.

Donald Trump’s brother Fred was an alcoholic and eventually died because of his addiction to drinking. He had warned a young Donald to never drink alcohol and Donald listened. He took it one step further and never did drugs or smoked cigarettes.

He Spends a Long Time on His Hair

While Donald Trump’s hair might look like a bad toupee to many, it is actually a carefully crafted hairstyle.  He spends a long time each day blow-drying his hair forward and then he takes the time to carefully comb it backward.

He Has His Own Star on the Hollywood Walk of Fame

Donald Trump got his own star on the Hollywood Walk of Fame in 2007. His start was the 2,327th star. He received the star for being a producer on his hit television show, The Apprentice.

Donald Trump Actually Has His Own Board Game

Donald Trump has his own board game that is titled Trump: The Game. It is a game that is like Monopoly that was launched in 1989. The game was discontinued because it had poor reviews and was not selling.

READ ALSO:  The History And Success Of Black Women Filmmakers Of Africa And The African Diaspora 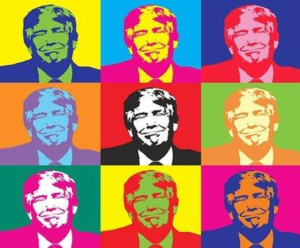 While Not a Drinker, Donald Trump Did Have His Own Line of Vodka

Donald Trump does not drink alcohol, so it was surprising that he curated his own brand of vodka. It was on the shelf in 2006 and Trump described it as “a superb product and beautifully packaged.” Sadly, for Donald, the consumers did not agree and did not appreciate the vodka. It had very meager sales and production halted in 2011 because of this.

When Donald Trump was just 13 his parents decided that he was too aggressive and boisterous. They thought that he lacked discipline and then sent him to the New York Military Academy. In 1964 he would graduate from the academy. He went on to the Wharton School at the University of Pennsylvania to earn a BS in economics.

Donald Trump was first married to Ivana Zelnickova Winklmayr who he had three children with. She was a 1968 Czech Olympic Ski Team alternate. He then was unfaithful to her and cheated with actress Marla Maples. He would leave Winklmayr and go on to marry Maples. He ended up having one daughter with Maples. The cheating led to Winklmayr confronting Maples in Aspen, Colorado on a ski slope in 1991. He is currently married to Melania Knauss who was a model. He cheated on her in an affair that became a scandal as he cheated with Stormy Daniels (a well-known porn star) but has remained with Knauss.

Many of Donald Trump’s Companies Have Filed for Bankruptcy

Donald Trump talks to the world as if he is a great businessman. He has stated that his amazing success is why he is the greatest president of all time. Many people do not agree with him. In fact, there have been four Trump-owned companies that have filed for corporate bankruptcy. Trump’s Taj Mahal, located in Atlantic City, filed for Chapter 11 bankruptcy in 1991. Trump Plaza, also located in Atlantic City, filed for bankruptcy in 1992 and Trump relinquished 49% of his share of the hotel to lenders. Trump Hotels and Casinos Resorts were filing for Chapter 11 in 2004. The most recent bankruptcy was Trump Entertainment Resorts who filed in 2009.

Trump’s Tariffs: A Move in the Right Direction

November 18, 2020 Edgar Reiss World Comments Off on Trump’s Tariffs: A Move in the Right Direction

When Donald Trump won the US presidential election the whole world was dismayed. Few people outside of the USA expected anything good to come of it and for a year and a half one disaster […]

After the 2016 Presidential Election the stock markets in the US hit all-time highs and even before Trump’s inauguration, the Dow is poised to cross 20,000 for the first time. This is surprising because many […]

“Drain the Swamp!” Wow, what an effective political slogan it was in 2016. It encapsulated public frustration with the boggy mess of lobbyists, money-grabbing congressmen, and regulation-making bureaucrats in Washington. Trump was just the one […]

The last years have seen an incredible growth in gaming console popularity. We see that besides the established users of consoles, a lot of people are converting everyday from the [...]

Sad news reaching us confirms the demise of actress, ‘Milliki Me Cool’ of Yolo fame has passed on. The sudden demise of the actress happened, Wednesday, 10th June, 2020 in the morning at the Korle […]