Religion consists of a labeled group of people who live to comply by principles and practices built from already existing minor spiritual fundamentals with each religion constantly claiming supremacy over the other.

Each of all 4,200 man-made religions that exists claim to be the one true religion.
Religion in fact is a selfish man’s use of the GOD concept to govern over people while limiting every possibility of common sense emergence in the believers of their selfish agendas.
Religions over the years have found very intimidating threats to get people to comply at all cost with their fail-safe being an eternal punishment in hell fire for those who fail to comply. 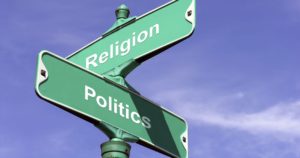 Religion basically has the human chasing ghosts and hanging on solely to promises of eternal bliss in a hereafter. Believe it or not, man is very powerful reflection of everything Godly. All the stories and tales surrounding these religions are mostly exaggerated concepts that overwhelm and amaze the human mind into buying the forged realities of such organizations. Religion is nothing but a control tool which is fairly convincing to an average reasoning mind.

READ ALSO:  Breaking Our Addiction To World Religion; Is It Possible?

Religion has done more harm than good and one doesn’t need rocket sciences to see this.
Religion is and will always be an opportunistic use of very little true spiritual realities to dumben the human potential.

Why do you think all religions claim to be true?… Why do you think everyone outside your religion is an infidel?… Religion has zero tolerance for human reasoning and fills people with silly excuses as an explanation to how the universe works. For example when the prayer of religious person isn’t ”answered” he assumes God has supposedly used it to protect him from a certain unknown tragedy. Excuses Excuses Excuses…

“I have never seen the slightest scientific proof of the religious ideas of heaven and hell, of future life for individuals, or of a personal God. So far as religion of the day is concerned, it is a damned fake… Religion is all bunk.” – Thomas Edison

Here is a little something to help you walk your very own path to truth:

PDF_Life and Teaching of the Masters of the Far East By By Baird T. Spalding (Published 1955)

Nathan Wood – The Secret of The Universe

Don’t worry i’m just kidding with all these. Out of 4200 religions yours is the truest and the others are some fake cooked up ideas. LOL

Spiritual / Psychics: Are They One

April 11, 2020 Edgar Reiss World Comments Off on Spiritual / Psychics: Are They One

Spiritual Growth is based on one's enlightenment and development of understanding within a particular practice based on ones spirituality. There are many forms of spirituality and beliefs. When we develop spiritual growth we find our […]

INTRODUCTION This critique covers the first three streams of the five topical sermons, namely, “ Preparing for the spiritual life '', “ The prayer filled life '' and “ The virtuous life ''. These sections […]

GRADE: AA / 90% Soodhu Kuvoom is a dark comedy built on themes of unemployment, kidnapping, blackmailing, police brutality, fake encounter and corruption but not even for a split second [...]

When you first start out blogging, you might want to make money, or just share your thoughts with others. Whatever your goal, there are some basic "best practices" that will help you to get new […]